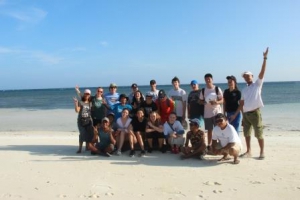 Oceans had the pleasure of welcoming a group of international students from Dubai with the Divers Down center. Not only did they come to explore the beautiful underwater world of Anda, Bohol, they had a big focus on conservation in the area.

On February 11th, during a sunny afternoon, this group rolled up their sleeves for a conservation activity; a coastal cleanup. The cleanup was done by Magic Oceans together with the students and the locals. A beach cleanup is by no means an easy task and can be quite daunting. So… the staff came up with something to make this cleanup a lot more fun whilst encouraging them to gather as much as they possible could. The beach cleanup was turned into a game!

There were about 30 individuals who joined the cleanup operation. All volunteers who took part in this event were divided into 3 groups. Each group was a combination of both the foreign students as well as locals. Every group had their own trash bags to collected as much waste materials as possible during the assigned time. The goal was to collect as much rubbish as they could, separate it and weigh it. The group that collected the most rubbish was the winner and Magic Oceans had a little something extra for them. All the trash was brought to the integrated waste management area of the small village called “Bacong,” to be properly disposed of. 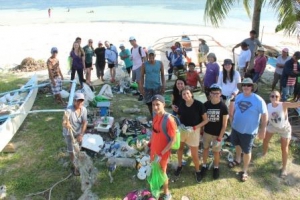 The group had an amazing (yet sweaty) time collecting trash, full of laughs! They had a lot of fun, as did the localsand the team at Magic Oceans. After their incredibly hard work, they enjoyed some local snacks together! They tried “dirty ice cream” and some refreshing coconuts, a great end to an incredibly rewarding activity. (Dirty ice cream is not actually dirty. It’s a sorbet-like ice cream, usually in mango or ube flavour, which is sold by street vendors! It’s called “dirty ice cream” to differentiate it from the store bought ice cream).

Magic Oceans would like to thank the local residents of Anda, the students and the teachers from Dubai for their effort, as well as the Barangay chairman Tinion, for his leadership.

Though the fight against debris continues, initiatives like this are a great effort and very much appreciated!

WHY A BEACH CLEANUP? 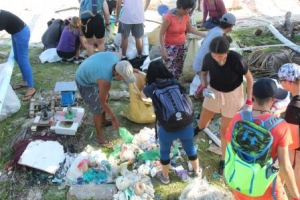 The beach is where the ocean and land meet. It serves as a buffer zone between these two. It protects the coastline from devastating strong winds and powerful waves from storms or typhoons. It is also an important habitat for both land and sea creatures, acting as their feeding and nesting grounds. Thus, it is important to keep it clean.