Our guide was leading us to the next cave and every time we passed a small passage he was speaking out loud; Tabi Tabi, po. I have new visitors! Being the daughter of a Filipino mom, I remember the old Filipino stories my mom told me when I was young and so I was familiar with these Filipino words. ‘Tabi Tabi po’, means basically ‘May I pass’ and is a polite way of asking permission to the spirits to enter their homes. My mom always told me that making the spirits angry or being disrespectful to them can result in sickness or unfortunate things.  Of course, I didn’t want to be cursed, so around every corner I obediently repeated our guide. ‘Tabi Tabi, po’. 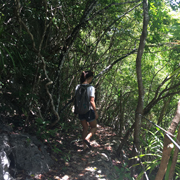 When you are going out to do the Mystical Lamanok Tour, prepare yourself to go adventurous. There is a lot of climbing and crawling through caves and walking through water involved. We stopped at a small place that looked quite abandoned to me. Our guide could tell us that in the past the island had been visited by many treasure hunters from all around the Philippines. The spot that he was showing us looked like it had been violated by people and you could really tell that they were looking for something. According to our guide, treasure hunters from Leyte found 3 bars of gold on the island and left the island trashed behind. It hurts to see the remaining of it and the damage they made. With a knot in the stomach we left the cave behind.

A few steps later that sad feeling transformed in being amazed. Suddenly we are in the middle of this open space inside the mountain with beautiful rock formations and hanging stalactites above our heads. The place was covered by empty seashells and a lot of bats were flying in and out the cave. This was the place where Ka Iska was living for more than 100 years. Our guide began his story; 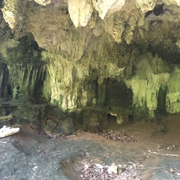 ‘This was the place where a young lady ka Iska hide herself after she could not go back to her village. All the people of the village were angry with her since she was being blamed for all the pregnant woman that went missing in the village. Ka Iska was accused for being a witch and was abandoned from her own village. Her life ended here on this island, but her spirit is still present.’-

She kept herself alive by feeding herself with seashells according to our guide and that was the reason why the whole place was covered by different kind of seashells. Lucky for her she got enough company from all the bats that are hanging upside down in the cave.