Something always fascinates me about the jellyfish. It’s such a simple creature that looks so innocent. With only a bell (the head), a gastrovascular cavity, tentacles and a hole that has the purpose of an entrance/exit, it is really a simple animal to see. But don’t believe what you see, because this little bad*ss has a killer ratio higher than any other sea creature. There are more than 1000 different species of jellyfish found all over the world. In cold and warmer waters and from the shallows till the deepest depth this planet has. The body of a jelly fish consists for 95% of water, doesn’t have a central nervous system, doesn’t have any bones, no blood, no heart and not even a BRAIN! How on earth is it possible that this animal survives already more than 650 million years on this planet!? 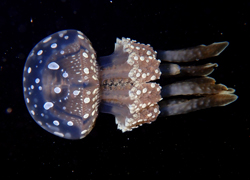 His real power is his tentacles that a jelly fish uses to sting or paralyses its prey and can get up to more than 30 meters in length. Although the sting from some species are harmless, there are other species that has really painful stings or can even be deadly to human. Their natural enemies are anemone fish, turtles, tuna, sharks and of course also the human, but since the jellyfish only needs a couple of weeks to be mature enough to reproduce, it is very easy for them to multiply and if they do, they do is by millions at the same time.

I guess it is safe to say that this animal is one of the most unique creatures in the animal kingdom.

If you want to know more about the life cycle of the jellyfish or any other detailed information about any particular kind of jellyfish, I can really recommend the Bio-seminars at Magic Oceans. We’ll show amazing videos about the jelly fish AND we explain
what the best thing is to DO after a jellyfish sting but also what exactly NOT to do.