Frogfish: a critter that puzzles your mind!

When people hear the word ‘frogfish’, they envisage a fish that looks like a frog.

However, it is called a frogfish because of its resemblance to the squat sitting position of frogs and not a froglike appearance. They are also known as an angler fish in several areas of the world.

Many think they are cute as they only grow from 1.5 cm to a maximum of 50 cm. Even though they are small fish, you will be surprised by their abilities.

They are a fish that loves to go fishing. A fish that goes fishing? Yes, you read it right.
They have a rod (illicum) and lure (esca) at the top of their dorsal spine that is located on their heads. You can also call this their fishing gear and it is important for them when they want to hunt for prey.

Next thing, is who would have thought that they are a genuine fish? Their appearance puzzles our brain. Before diving, divers minds are already set to look for a frogfish. Then as the dive goes on, they sometimes feel hopeless in searching for them. However, as frogfish are poor swimmers – since most of them don’t have a swim bladder – the main area to find them is on a coral reef, in seagrass beds, or on a sandy bottom.  Which means they can be found in many places. 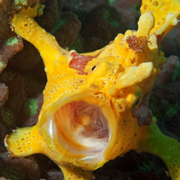 Frogfish are characterized for their striking and odd appearance. So much so that sometimes you will not think that you are staring at one or that thing you passed by that made you decide to go back and to take a closer look was actually a frogfish. Then “bingo, you find one”. You, yourself can be proud for having such keen sight as they are masters of camouflage and can look like a stone, coral, or even a sponge.They are really masters of disguise. Frogfish can copy either a simple or intricate background. It may only take them seconds, minutes and hours or it can even weeks to blend in into their surroundings. Sometimes they may have to change colour, grow bumps, warts, hairs, flaps, or filaments, that is one of the many reasons why they are difficult to identify. Different species can look similar but in reality they are not. For example, you can be mistaken for thinking one is a painted frogfish but it is actually a clown or warty frogfish.

Last but not least, frogfish normally find a good fishing ground and stay there. Then they rely on their camouflaging ability as they display their fishing gear and lie in wait. However, they can also surprisingly attack their prey. Frogfish are also one of the best ambush predators of all fishes because they can catch a fish out of a school without others noticing it has even gone. Their mouth can expand up to 12 times its original size and also swallow something that is twice as big as its own body!