Pagasidae are more commonly known as a Sea Moth or Pegasus. There are only six species of Sea Moth, the most common in the Philippines being the Dragon Sea Moth. 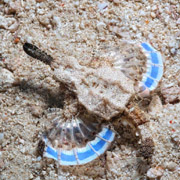 They are found on coastal seabed’s in the tropical waters of the Indo-Pacific region, between a depth of 3-90m. Preferring sandy or rubble seabed’s where they use their mottled colouring to camouflage themselves into their surroundings. That’s why they’re not seen in coral reefs.

Their name alludes to their huge fanning fins which resemble wings – hence Pegasus.  However, their wing like fins are not the only odd thing about this ‘fish’. They also have hook shaped pectoral fins which act as legs that they use to walk along the sea bed, whilst they use their ‘wings’ to steady them as they go.

Another odd fact about Sea Moths is that they do not have scales, like their close relatives the seahorse. They are covered in bony plates (carapace) and a thin skin. They shed their skin every 3-7 days to rid themselves of parasites.

Perhaps it is due to their habitat and the fact they are not schooling fish, that Sea Moths are monogamous and mate for life. You will often find them scurrying around in pairs. The males following closely behind the female to prevent any other male 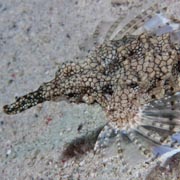 Sea Moths spawn by releasing thousands of gametes (eggs from the female and sperm from the male) into the water column. By swimming up from the seabed and pressing their bellies together as they release their gametes they hope that they will successfully mix and fertilise. Coming up from the seabed gives the fertilized eggs a greater chance of survival, however only a small percentage will actually make it to adulthood. Therefore, they will mate frequently during the breeding season to have the most chance of continuing the species.

If you would like to see these beautiful and quirky fish, just ask your diveguide to point them out to you, but, be prepared for the fact that they are shy and will quickly turn away from you just as you have lined up the perfect shot!